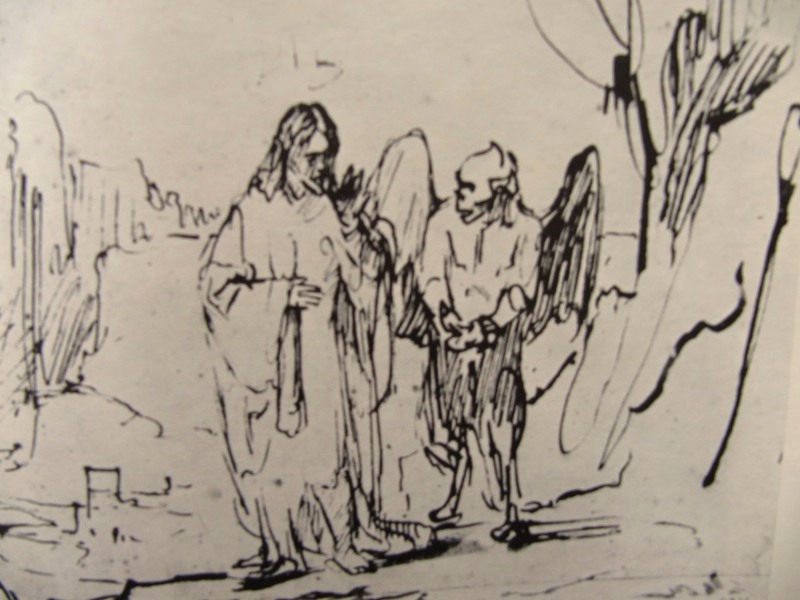 2. This is Rome, Son of God, a city which is forever associated with your name.

1. Of course I know about Romans and their Empire….

2. I understand that by the end of your life, you may know more….

1. Why have you brought me here?

2. I’ll show you why, but firstly I have to tell you WHEN I’ve brought you here. We’re in the time of the Emperor Domitianus some sixty years after your untimely death, and we’re about to follow this crowd on one the great Roman roads, the Via Appia.

1. They seem happy, both men and women, often with children…..

2. They’re going to see a spectacle provided by the Emperor for the amusement of citizens, while it is also a terrible warning to the enemies of Rome, as you see, Son of God….. I notice you have gone pale with distress at what you are witnessing……

1. I have already, in my own land, seen a crucifixion or two. But so many men, on so many crosses along the road! And worse, so many people, including children, gawping at this sad evidence of human evil.

2. You may notice near the crosses, small groups of women who are weeping. These are the mothers, wives and sisters of those who are being punished.

1. May God comfort them! But what did these men do, to earn this pain?

2. As you might say, Son of God, they learned to do God’s will on earth.

1. You’re mocking me, my friend. Just give me the facts.

2. In Rome the citizens accept as a respectful custom that at certain altars set up in public spaces they will burn a pinch of incense to the divine Emperor. Everyone does this. It’s no more significant than saying they’re glad to be here. Even enemies of the state, who desire to overthrow it, burn the incense because it hides their purpose. Even some Jews do it, while remaining faithful to God, believing as someone sensibly said, that you can give to Caesar what belongs to Caesar, and to God what belongs to God.But your followers refuse to do it.

1. And for that omission, they are condemned to this!

2. No, no, this is merely the end point. Romans are merciful. First they torture them and let them go if they promise to be good citizens. Many of your followers have benefitted from this generosity.But some, determined to do God’s will rather than Caesar’s, have chosen this extremity. Is yours a good legacy, Son of God?

1.I did not invent the Romans

2.But you did invent the stubborn people who oppose them.

1.Perhaps these victims of the state trust me and my teaching but if so, they have freely chosen to do so. I may have introduced them to the Father, but they are acting as his children in their own way and in their own time.If they believe that the honour of God requires this sacrifice, I bow to their courage. If the Romans were half-civilised they would avoid such abominations.

2. But you can’t deny surely that these deluded disciples are following your example in refusing to bow to Roman authority even in the face of torture and death….

1.You forget I am human, unlike you, my friend, and have no knowledge of the course of my own life.I will advocate neither rebellion nor violence against Rome. I will encourage people to work peacefully for God’s rule in the world.

2.And here they are, dying for that advice. The least you can do is to accept responsibilty!

1. That’s because you have a false view of leadership: you think leaders demand obedience from their followers and can claim credit or accept blame for what they do. In fact good leaders present clear example and wise guidance. If their followers do well, the credit is their own. If they take risks, the courage is their own. If they make changes to the leader’s guidance, the responsibility is their own.I followed John the Baptiser, but he is not responsible for any good or ill done by me.

2. To give one’s life for a cause, Son of God, is to make the cause more important than life. You may come to realise just how dangerous that can be.