This famous expression of Robert Burns in his satirical address to King George 3rd in the year 1778, means in English that “facts are lads that won’t be moved,” which remains true even when we know that facts don’t meet us ready made but have to be constructed. E= MC2 may be a fact about the universe but it took Einstein a bit of labour to find it. Human beings do not live by facts alone but we should all be ready to live with facts even if they contradict our cherished myths or opinions. Mr Trump is convinced for no good reason that Iran is a very wicked country, possibly because it harbours a desire for influence in the world similar to that of the USA, but he would do well to look carefully at the facts, as befits a man who is always complaining about fake news.

My weekend dose of science from the Spanish newspaper El Pais brings me a story which shows the relationship between myth and facts very clearly.

For many centuries people have puzzled over the great stone statues which stand in numbers on Easter Island, in which the heads are at least half of the whole artifact, so much so that some travellers described them as simply heads or faces. After more than a century of research archeologists describe them as images of ancestors, believed to hold ‘mana’ or sacred power, to protect their living descendants, and perhaps the island itself. They were constructed continuously over a period of 250 years between 1250 and 1500 CE, and this competitive cult – the size of your ancestor’s image was important- may have exhausted the resources of the culture that produced them.

But who were the islanders? And how had these human beings reached such remote pacific islands? Some historians considered the statues to have links with Amerindian culture, Aztecs, Mayans,  maybe, but their critics pointed out that with the very primitive water transport available the huge distance would be uncrossable. Cue Thor Heyerdahl whose Kon-Tiki raft with its crew sailed from Peru to Polynesia across 5000 miles of ocean, proving to Heyerdahl’s satisfaction the possibility that the  islands were settled by immigrants from South America. He liked  myths of jouneying, believing also that some  Caribbean islands had been settled from West Africa 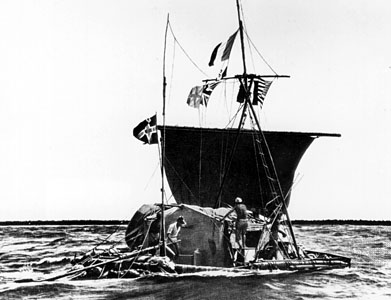 Scientists have just finished testing DNA from five Easter islanders, three whom.ived after European/ American contact with the islanders and two from before. The three showed some elements common to Amerindian DNA and the two showed none, but instead some common elements with the so-called Denisovans, a human group contemporaneous with Neanderthals, which can be traced in the populations of the Asian mainland. It seems the original Easter Islanders came from Asia.

After many years of speculation, mythology and argument, one scientific discovery is enough to establish the fact. Before the DNA sequencing technique was available the issue was open to argument. Now a fact is established and further understanding of Easter Island history has to start with it. The rigour, beauty and value of scientific investigation are made evident by this story.

There are many Christians who believe that Jesus earthly corpse was raised from the grave by God’s power leaving the empty grave behind. If so, the DNA of the risen and exalted Jesus ought to match up with that of other first century Jewish corpses. It might seem blasphemous to ask the Son of God for a blood sample, but if it could be arranged it would help settle matters of theological debate. Of course the same believers may point out with some justification that Jesus’ DNA was already odd, as it derived from his mother and the Holy Spirit. Furthermore, there is also a argument that Jewish racial identity, as asserted in the  Bible is itself a myth, which could be examined by DNA evidence

from the past and the present. It is possible that instead of issuing from the loins of Abraham, Jews are a congregation of many races, pressed into racial purity by their own propaganda and the prejudice of others.

The power of science to establish facts amd settle arguments is disturbing to those who love the myths which can be tested by its procedures.

I would argue, as indeed Jesus himself did, and his first followers, that the “DNA” shared by his true brothers and sisters is not physical but spiritual, based on a commitment to the justice and goodness of God, and proven in voluntary poverty, sorrow at evil, generosity, peace-making, mercy, purity of heart and readiness to suffer for justice. These characteristics are also matters of fact, which establish a believer’s likeness to Jesus, and demonstrate his contemporary aliveness in a way that goes beyond all mythology.