It’s some time since I gave my readers any information about my blog’s mascot, Desperate Dan, whose statue strides across the city centre of Dundee accompanied by his dog called Dawg. It is the most populat piece of public art in the city, with locals and visitors. Somehow it works as a symbol of Dundee and its people. 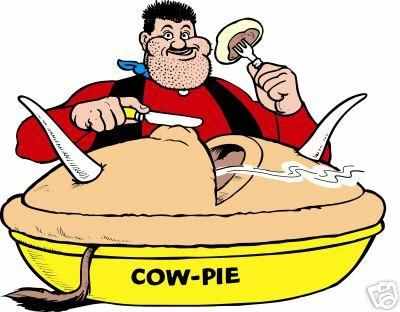 He was in invented in 1938 in the Dandy, the famous comic published by D C Thomson, who still flourish today. Desperate Dan (DD) was originally a wild western desperado, but over time evolved into the giant muscleman who used his strength to help others, especially children. His most famous habit is his addiction to cow pies, enormous meaty dishes with the horns sticking out of the pastry. A succession of gifted artists drew the cartoons, whose bright colours and bold forms delighted generations of children. Even today, years after the sad death of the Dandy, DD Annuals and paraphenalia sell well, especially at Christmas, and a huge DD mural decorates the gable wall of the Thomson building.

What’s the appeal? Well, unlike DD, Dundonians male and female, are neither tall nor  large and may relish the thought that a huge, strong and genial giant is looking after their welfare: in the face of officialdom, the Law, Nazi Germany, employers, the Church and bullies everywhere, Desperate Dan was on their side, and would, however clumsily, help them win the battle. The clumsiness was important; Dan was a superhero with the human quality of messing up, which especially endeared him to his admirers. He wasn’t like Superman who never made a mistake, which allowed children and adults to identify with him. There were attempts over the years to broaden his appeal, by giving him a family – I think I remember an Aunt Aggy, and maybe a Squaw, yes, honest, a native american, but these soon vanished as they only detracted from the lasting appeal of the Big Man.

The process of developing a popular superhero has been called, by people with too much time on their hands, as “mythopoeic enhancement” which adds to the hero’s profile elements from the history and character of the readers, so that he/she becomes their hero. The Greeks, who were addicted to warfare and wisdom, could identify with Homer’s heroes, the angry warrior Akhilles and the wily wiseman Odysseus. As in the case of these heroes, popular response to the early stories of DD contributed to the further development of the character.

Nobody should think that the technical accomplishment used by a comic book artist, who is required to invent and present episode upon episode, is trivial. Some of the greatest artists like Michelangelo have used their techniques to great advantage, as he did on the Sistene Chapel ceiling. But the enhancement of the myth by elements of character and ability which come from its audience’s experience demands an equal if less recognised skill. People may show reverence or awe before some reprentations of heroes; DD has always been able to count on the affection of his admirers.

So where does that leave Jesus, the other hero of my blog, which I called xtremejesus because the UK Government classified as extreme anything that contradicted  British values or denied our national narrative, such as the Jesus of the Gospels? Isn’t he too an invented figure, mythopoeically enhanced? Isn’t he the work of  skilled artists, who also had the ability to incorporate into their story fundamental experiences and convictions of the people for whom they wrote, using material from the tales told and retold in their communities. Yes, he is, but unlike DD who has no particular time and place, no history, no identification, Jesus is presented as living in Galilee and Judaea in the time of named emperors, kings and officials, having an ordinary trade, that of carpenter/ builder, belonging to an identifiable family, and entering recorded history as a result of his challenge to named religious leaders and a named official of the Roman Empire. The earliest evidence about him comes in the letters of St Paul written less than 20 years after his death. Unlike superheroes, Jesus died, which is a reasonable indication of real humanity. So Jesus was a historical person, about whom we know at least some facts.

But surely I’m not suggesting that the Gospels with their angels, demons, miracle cures and walking on the water, are factual accounts of their hero? No, I’m not; the Gospels include much invention and mythopoeic enhancement. The usual critical interpretation of what the gospel stories are doing is that they are turning Jesus into a superhero by giving him abilities which are supernatural. If we take the story of Jesus stilling the storm in Mark, we are inclined to agree: Jesus is described as stopping a storm at sea by his command. And it looks as if the author does want his audience to think of Jesus’ supernatural power, for he finshes his story with the question, “ who is this that even the wind and sea obey him? 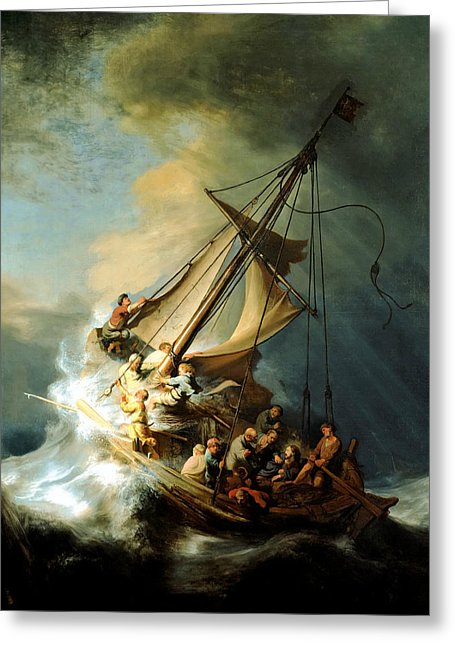 If we want a fuller understanding of what’s going in this story we have to look at the Jewish consciousness of the sea, displayed in their  Bible. The sea is the image of pre-creation chaos in Genesis 1 and of the return of chaos in the story of the flood. The Psalms and the book of Job praise God for controlling the turbulence of the great deep. The chaotic potential of the sea was part of the thought and experience of every Jew. It was particularly linked to evil and death. So when Mark tells his audience that the boat with Jesus and his disciples is crossing the sea of Galilee, the audience pictures a journey through chaos to safety, which is of course an image of the journey of faith. When the storm strikes the boat, Jesus is asleep, apparently uncaring, as indeed he might seem to be to disciples facing personal danger or persecution. This mysterious sleep of Jesus mimes the fact of his death – this Jesus who commands the ship of faith, appears dead when chaos strikes. But when he awakens, demonstrating his risen life, he can issue the command to the elements of chaos, “Peace, be still” because he speaks in the power of God. The result, in nature and in the minds of his disciples is a “great calm.”

In this case the mythopoeic enhancement uses imagery from the Jewish culture, with which however people of all cultures can identify, to address the experience of abandonment common to all humanity. Just when terror strikes, when the diagnosis is bad, when the baby is stillborn, when the car crashes, when the holiday is interrupted by a hurricane, when the mortgage cannot be paid, just then the hero, the saviour, appears to be asleep or dead or not to care if we drown, Then we, the audience are told two things: one, he’s in the boat with us, sharing the danger, we are not on our own; two, when he responds to our fear, as he will, he can speak a word from beyond us, a creative word which calls the chaos to order.

The story is if you like a dream sequence depicting Jesus the crucified and risen Lord who is with his people in the fragile ship of faith. A simple moment from the history of Jesus, crossing a lake in a boat with his disciples, becomes a story about the One who was dead and is alive for evermore. Often miracle stories are pieces of magical realism that depict a fact about the relationship of Jesus and his followers, rather than about the life of Jesus in Palestine.

Even when the gospel story is apparently ordinary history, as for example, the trial of Jesus, the magical realism is still present – just listen to that cock crowing three times! We can interpret the enhancement of the history of Jesus as a subtle way of communicating the human meaning of his life and death and rising. And besides, they’re good stories.

Desperate Dan is a product of my culture, Jesus is the producer of my faith. Two good men.