I listened this morning to the minister for Education, Ms. Greening, defending the Government’s plans to permit a new generation of selective schools in England and Wales. She emphasised that unlike the grammar schools of old these would not be exclusive upper middle class enclaves but would serve bright kids from all classes, thus giving all parents greater choice over the education of their children. For example, if parents wanted to protect their kids from having to mix with poor trash kids, they would no longer have to pay for the privilege, or even pretend to be Christian to get them into Faith Schools, but could choose to enjoy educational apartheid at public expense. 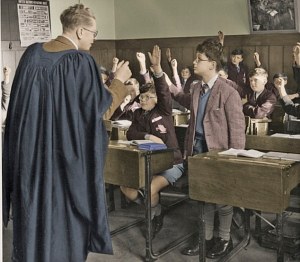 Well no, Ms Greening did not say that, but she meant it. In education, as in many areas of public policy, GREATER CHOICE is code for favouring the few at the expense of the many, and private purchase over communal provision. The Thatcherite destruction of Council Housing is a case in point. It gave people the choice of owning their former council house, thus putting public assets in private hands, and depriving future generations of working people of decent affordable housing. The privatisation of transport services such as bus and rail was sold to the public as a way of giving them  greater choice, for example the  choice between paying exhorbitant fares for a poor train service or walking to work. Soon I predict, the Government will be encouraging the growth of private hospitals so that patients who are having to wait for rationed NHS treatments will have the choice of paying to skip the queue, while those who can’t afford it will have the choice of dying. We’ve heard of “spoilt for choice” but such measures give “choice for the spoilt.”

Some will point out that the postwar grammar schools did include some working class kids who then did well, but that was against the background of the greatest social equality that Britian has ever enjoyed, whereas now, after Mrs Thatcher got rid of all that equality and its institutions, a neo- thatcherite government is liberating the rich to forget the poor and concentrate on so-called wealth creation. In such a climate new grammar schools will simply become a way of asserting that the poor are thick as well as lazy.

CHOICE is of course a capitalist strategy. If you want people to buy more than they need, you have to offer choice, like the multifarious choices you have to make to keep up with fashion, or the 23 varieties of tomato on sale at your local supermarket. Even if we always buy basic tomatoes, the display tells us that we live in a world economy where exotic choices have become possible for the ordinary person, due to our capitalist market – economy.

All this choosing keeps us buying, which of course supports the economy, but even more imporatntly it keeps us from looking too hard at our masters, like the bread and circuses of ancient Rome. We are given thousands of trivial choices while being deprived of any real choice in how we live and how we are ruled. The rich get richer and the powerful get more powerful than the governments of many small countries.

If we want some influence over the human response to global warming, we better reject the notion that grammar schools are a worthwhile choice. If our great-grandchildren are suffering the consequences of global warming, survival rather than education may be their first priority. The bible has always pointed out that practical wisdom is worth more than rubies, and that God’s teaching is better than fine gold. Jesus made it clear that human beings have one fundamental choice: to serve either God or Wealth, for they cannot serve both. Only this choice matters, for if we make the wrong decision, no fruitful choices are left.