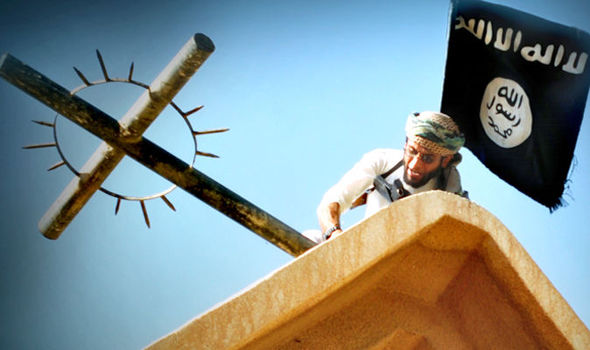 In my last but one blog I argued that it was time for the Christian Church to talk to Daesh. There was a mistake there as Daesh is a dismissive name for the movement that calls itself Islamic State. If I want some one to talk with me I should show respect by addressing him politely. I have also spent some time trying to discover a way of approaching Islamic State, without much success, although my online searches may already have got me on the books of MI5. I did however find a very helpful website,The Clarion Project (clarionproject.org) which collects information about the group. There I was able to read the latest issue of IS magazine DABIQ (see image above) which is aimed at Christian believers.

It is an interesting and dismaying read. Most dismaying is an article entitled “Why we hate you” addressed to Christians which lays out the main reasons for the group’s hatred of them. The primary reason given is theological: Allah is One and Christians with their doctrine of the Trinity have given him “partners in divinity” which is a blasphemy against God punishable by death. Secondly, Christian societies permit detestable practices forbidden to Muslims, including homosexuality and lending money at interest. Thirdly, Christian societies are democratic, making a division between religion and state, whereas Allah desires to rule all of life. Fourthly Christian societies have cooperated in war on Muslims in many parts of the world. Throughout the writer reminds the Christian reader that they are hated principally for not being Muslims. Even if under some agreement IS stopped its violence towards Christians, the writer is quick to assure Christians that they will still be hated. So there’s no point in Christians trying to rein in their governments’ mistaken war policies, for DABIQ states quite clearly that its war on the Christian West would continue.

It is interesting to be faced with such an open message of hate. Mostly powers that mean you no good cloak their ill-will in specious justifications, like those who want to frack our land  to “help our fuel needs”, rather than  to line the pockets of the fracking company, because they imagine that if they admitted their total contempt for the local population it wouldn’t go down very well. IS is almost a parody of anti- Christian attitudes, “God is hate and those who live in hate live in God” or “We hate our enemies because God hated them first.” Although their capacity for killing is well established, there’s just a touch of the pantomime baddy about their utterances in DABIQ, ” Don’t imagine you can ever soften me up,  ’cause I am a more serious kind of hater than you have ever met before; yes, I am!”

My own interpretation of this rhetoric is that it isn’t really meant for me or the average Christian, but for the families and friends of jihadis who may be wondering whether their relatives have simply joined a bunch of crazed killers. It tells them that hatred and bloodshed are commanded by Allah towards the kufr (infidel). It is also for public consumption: as those who oppose Donald Trump are finding, hate sells. Those who are slightly guilty about the anger they feel towards the system, either as possessors of wealth angry at paying taxes, or as poor people angry at being oppressed, they can be liberated by Trump to feel hate for the status quo and to trust Donald to smash it. Similarly Muslim men and women angry at the continuing racism in their societies are being told by IS that hate is OK and that their personal hate expressed in violence can be a tool in Allah’s hand.

Clearly their theology comes from a particular form of Islam, namely Wahhabism. But the view that all Christians are blasphemers is an authentic teaching of the Qur’an, in its characterisation of Chritian faith as “giving partners” to Allah, meaning the effective denial that there is only one God. Indeed it is possible historically to interpret Islam as the rejection of an increasingly complex doctrine of the Trinity and a Christian Church which had become secularised as part of the Roman Empire. The doctrine of the Trinity is precious to me, but I wonder how many Christian believers in Scotland today would be prepared to die for it. Most believers are vague about such matters. Jesus is all-important to them, and close to God, but divine? The Holy Spirit is also important, but isn’t it just another way of talking about God? On this issue as on the other “causes of hate”, many Christians may feel that it would be good to talk with Muslims, in the hope that they may gain a deeper understanding of both Islam and Christianity.

But that’s just the point. IS doesn’t want to talk; it wants to defeat the infidels and force them to bow before Allah. It says it will continue to hate infidels until we convert to Islam. So, one minute we, as human beings, are detestable creatures worthy only of brutality and death, and then, by the magic of submission to Allah, we become dear brothers and sisters. Who could believe this? On either side of conversion we are surely the same people. Even if we were to be born again into Islam, we would still be the same people, so how could we have been hated? How can we now be loved? There is an incoherence in this teaching. Christian evangelism reaches out to non-believers in  love, not hate. The communication of Christian faith is an act of love. Again I would like to talk with IS members about this because it seems to me to be at the root of their project.

That project of course is what IS calls the khalifate, the right Islamic rule of a territory with the full implementation of shariah law. IS proclaims its hatred of the secular state. Allah is insulted if He does not rule the state as well as the lives of believers. But of course, in truth, Allah does not rule directly; he entrusts that task to his imams and ayatollahs, with their interpretation of his law. So the Khalifate is saying, “you will obey our interpretation of Islam.” The submission is not only to Allah but to individuals who may have chosen themselves for this honour. Here also there is surely matter for discussion with IS.

I guess IS might have harsh questions for me, but I would consider my time well used in answering them. The barrier to discussion between IS and Christians is the view of IS that there’s no point in talking to kufr who must simply be made to submit. But I have to ask if behind all this belligerence there is not fear that some IS doctrines may not stand rational scrutiny. The assertion that our human ideas are exempt from scrutiny is to confuse ourselves or our scriptures with God – and wouldn’t treating the Qur’an as God be giving God a partner? I am too used to challenging the authoritarianism of my own faith community to be over-sympathetic to its use in Islam or any other community. But I and many other Christian believers are completely open to a dialogue with brothers and sisters whom we love in spite of our hatred of some of their actions. Let’s talk!