If there’s a minister in Scotland who is forever applying for the role of Old Testament prophet it’s the Rev. David (Elijah) Robertson of the Dundee Free Church of Scotland, and there are few areas of Scottish life untouched by his vigorous denunciations. In some instances his well-argued polemics have been a welcome antidote to liberal platitudes, in others more an expression of theological prejudice. Just this morning I see that David (Elijah) is at it again, this time as a spokesperson for the “SNP for Leave” campaign, on the subject of the forthcoming referendum, in an essay in the Sunday Herald.  His argument is: 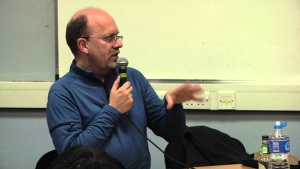 Most people will notice some strange things here. At present, the Scottish people, in a referendum, has chosen to be governed within the UK. If that’s their use of their God -given right, then presumably God gives it his tentative approval, however much Rev David (Elijah) may disapprove. In fact the whole article suffers from the ambiguity as to whether  it is arguing against a future independent Scotland or Scotland now as part of the U.K., remaining in the EU.

The point about the lack of full democracy in the EU has been made by many others, but it cannot be honest to ignore altogether the EU Parliament and its elected representatives including those from Scotland. An argument that pretends the EU is simply non-democratic is inaccurate.

In fact we must contrast the existence of an EU Parliament with the utter lack of any institutions that might allow an independent Scotland to have influence in an “interdependent” UK. Indeed this “interdependence” is a prophetic vision which must be God-given as there is no earthly evidence for it at all.

These elements are curious. There are also some good elements, such as a genuine concern for grass- roots democracy, for the Scottish fishing industry, and distinctively Scottish social justice proposals, like banning tax- avoiding companies from bidding for public contracts.

But as a fellow theologian I find myself suprised by the absence of any genuine biblical perspective. I imagine David (Elijah) will have one which he has chosen not to use when arguing a secular issue, but its absence permits him to be more positive about nation states, such as Scotland, than the Bible is. The desire of  the confederation of tribes called Israel to become a nation state and be governed by an elected monarch is viewed by the  biblical prophets as rebellion against God. The people are warned that their new King/ government will rip them off and lead them into dynastic war. And even after the successful reign of King David, his successors are judged by whether they worshipped God or idols, and gave justice to the widow and the orphan, that is, to those who had no social power. The best that the Old Testament expects of the nation state and its rulers is that they are not idolatrous and protect the weak and powerless! That’s it.

The New Testament is no more positive about the nation state. Jesus announced a Rule of God which had no place for either the rule of Rome or of Israel/Judah, nor did he propose a caliphate or theocracy that would implement God’s Rule. He expected that God’s Rule could be exercised in communities of those who accepted it, underneath, within, and alongside the nation state or empire. The only teaching we have from Jesus that  is directed at  “nations” is in Matthew 25 where the nations are gathered before the true king and judged as to how they have treated the hungry, the thirsty, the immigrant, the naked, the sick and the imprisoned, with whom the true king is identified. This goes further than the Old Testament, but does not expect more of the nation state than basic social justice and care.

I make this point to suggest that Christian people ought not to assume that the nation state itself is a boon to humanity. It tends towards unrestrained competition with other states which is ultimately resolved in war. This pessimistic realism about states is characteristic of the biblical tradition and of the best Christian political writing. From this perspective we cannot assume that an independent nation is always desirable or that full sovereignity is always better than international association. With this in mind we might see the founders of the EU as looking at the history of their nation states in two world wars, and recognising that their full sovereignity had become demonic and required restraint; and that their mutual ignorance had issued in bigoted hatred of neighbouring peoples. Shared sovereignity could accustom legislatures to decisions made for the good of neighbouring nations as well as their own; and the freedom of people to learn work and play in other nations could foster transnational community. These, as well as free trade, were the hopes of those who founded what has become the EU. From a biblical perspective they could be seen as ways of undermining the self- idolatry of nation states.

But perhaps David ( Elijah)  has thought of all this and dismissed it, either because he thinks that  the EU Is seriously oppressive or that the Scottish nation is especially just, or would be, if only it could free itself from Brussels. He would have to justify either of these positions by more coherent argument than he has provided.

Although I am not a prophet, I do judge politics from a biblical perspective, which leads me to ask the following questions about the referendum:

These criteria do not make for easy answers. For example, the poor of the UK are the most adversely affected by immigration, but they lead me, on balance, to vote to remain in the EU, which puts me at odds with D (E) our national prophet. But they led me to vote the same way as he did in the last referendum, so maybe there’s hope for me yet.