Today a fierce storm whips up waves in Oban bay, on which I look out from the window of my rented house, where I am on holiday with my family for a few days. Yesterday was cold, sunny and clear, but today I can hardly see beyond the near island of Kerrera; and I can hear a constant rattle of rigging from the yachts moored offshore. 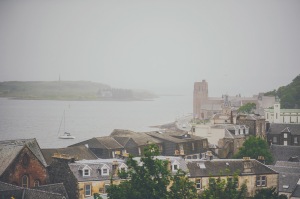 I love warm sunshine but prefer the climate of Scotland to those that have less variation. Our adult acceptance of rain is a recognition of our partnership in an ecosystem. We have evolved with a need for water which we share with many other creatures. The shapes of this landscape which give me such pleasure have been sculpted, eroded and smoothed by the movement of water over millions of years. Indeed when recently I saw a photo of a Martian mountain clearly fashioned by water descending under the force of gravity, I felt for the first time a sense of kinship with that planet. On the other hand, when climbing a mountain in Spain called Mulhacen in early autumn, I found the arid ground of its upper slopes, where only a kind of spiny grass can grow, utterly alien and slightly repellent.

Water is a signature of the kind of life we are, which is why we search for its presence on other planets. That’s one of the reasons why global warming is such a threat, desertifying whole countries. Pessimists like me do not envy our great grandchildren the water wars which will surely erupt in their lifetime. Only a disciplined recognition of our fundamental partnership in a planetary ecosystem will enable them to survive.

When Jesus wanted to illustrate the impartiality of God he spoke of him sending sunshine and rain on the just and unjust alike. Human beings may not honour the basic partnership of creatures, but the creator always does. 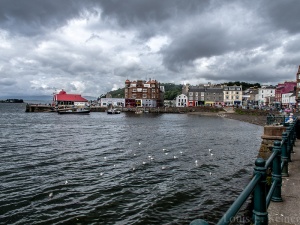 Another ecological necessity we share with other creatures is death: the arrangement of molecules which permits life does not last forever. The fingers that type these words have been around for 74 years today, and have been useful, but already they are neither as agile nor as strong as once they were, and like the brain that articulates these thoughts, they have a term. If biological organisms are programmed to survive, while being made of perishable stuff, reproduction allows the mortal organism to project its life beyond its own death. Indeed, the organism may have done all that it is programmed to do when it has reproduced. Creatures die when they are no longer able to adapt to the changing environment of each new day. Species die when they can no longer adapt to a changing ecosystem, although altered or mutated versions of them may survive, as for example, a smaller sort of cod is proliferating because its human predators want big fish.

In the diversities of birth and death we can detect no invisible hand that nudges the system in any direction, no intelligent design that favours the continued existence of Homo sapiens. It’s as if the creator, if there is one, trusted the process begun by the Big Bang to do its own work. So where in this process are there signs of the divine spirit at work, and how can the communion of mortal creatures have any real meaning?

Alfred Tennyson faced excatly these issues as he mourned the death of his dear friend Arthur Hallam whom he honoured in his “In Memoriam”. He struggled not only with the mortality of his friend but also with the growing evidence of the ruthlessness of evolution. The struggle led to a creative breakthrough:

“If e’er when faith had fall’n asleep

I hear a voice,’Believe no more!’

and heard an ever-breaking shore

that tumbled in the godless deep-

A warmth about the heart would melt

stood up and answered, “I have felt.”

Now this is not, as some of Tennyson’s critics have thought, an appeal to emotion over reason, but an insistence that reason should take account of human emotions and relationships. Tennyson loved his friend so much that he felt crippled by his death. He was not merely the selfish product of a selfish gene but a living person who had opened his life to another person. He takes his stand that this openness of one mortal life to another is the point from which an understanding of life must begin. When pushed to account for his own significance in the face of death he says, “I have felt.” Not I have achieved, or I have earned, or I have conquered, or I have had sex, or I have thought, or I have survived, but I have felt, I have opened myself to another life, I have communed.

If we start from there maybe we can see even in the simplest forms of life some signs of this communion. As for example, when the amoeba divides, does it not open itself to another life? Or when single-celled organisms cooperate in the creation of multicellular animals, do they not open themselves to another life? And in the processes of sexual reproduction, in conception and parturition, do the partners not open themselves to another life? I say that they do, and that moreover this realm of the in-between, this annihilation of biological independence, this being-in- relationship is also a partnership in the divine spirit. I do not mean that the Spirit is some ethereal gloop added to the experience of communion, but rather that it is precisely this emptying of self and opening to another; it is communion experienced as a gift.

This picture of the divine spirit allows us to talk of God’s creative involvement in the process of evolution, opening up new partnerships while sharing the pain and mortality of living things, doing justice to biblical theology and scientific truth. Readers will rightly ask for more justification of this claim, and I will attempt in subsequent blogs to provide it.