This week I am on holiday with my family in Oban on the West coast of Scotland. I suppose over the years I have been on more holidays here than I can easily remember, as a result of which it is populated for me not only with indigenous Obanites but also with dear people who shared these holidays with me, some at a distance, some gone from this earth.

From my window I can look out over Oban bay towards the island of Mull, with its mountains, which are a little misty this morning but showing glimpses of their snowy summits lit by the sun. The sea is calm, light grey in colour; the Calmac ferry with its red funnel crosses my line of vision heading north and west to the islands. All is well. God lives here.

For me this is God’s own country because it’s my own country. I grew up in the west of Scotland, in Glasgow, from where as a child and a teenager I explored the west coast on bicycle and bus. For that reason I could tell I was in the west even if I was blindfolded, from the scent of the air and its softness on the skin. I am used to its mild, wet, climate. And its characteristic landscapes of water and mountain; its intimate glens and creeks, its acid soils with surprising patches of green and small wildflowers, are for me both familiar and heart-breaking. This is the earth I will leave reluctantly when I die.

All of this comes about because I have been moulded by this ecosystem and am therefore better adapted to it than to any other. If this has happened in my short lifetime, what is it like for the common gull that sits on the roof of the house across the road? Here is a creature which has evolved over millions of years to survive in this ecosystem, and has particularly adapted to the presence of human beings and their trash. What, I wonder, does the gull sense when it moves around this town? Does it feel pleasure in familiar sensations, does it have its own memories, its own God?  I shall never know because it cannot articulate its thoughts to me, but I know that I share much of its DNA, and some of the useful inventions of evolution, like eyes and gut and brain. I may imagine my brain is superior, but perhaps it pities the limited mobility which forces me to go through the whole pantomime of taking a boat to Mull, which it can reach in a few flicks of its wings. 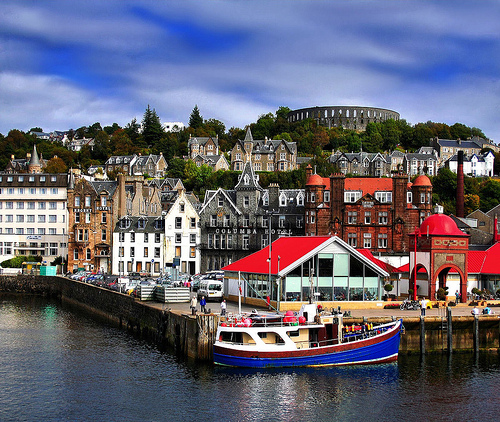 Just as I cannot imagine that my own adaptation to the west of Scotland ecosystem is irrelevant to the purposes of the creator of ecosystems, no more can I imagine that the adaptation of the gull is irrelevant. Life is not a single project, however much human beings wish to imagine that all ecosystems are simply made for them. If,as Nikos Kazantsakis thought, ( see my last blog on this site)  the great cry of the creator pushes humanity to evolve beyond the constraints of biological life, we should not judge that all other forms of life are merely discardable stages on this quest. From the microbes that inhabit our gut, to the gull, which in one swoop now crosses the streets to the waterfront, we are partners in the one project of life on this planet, and may have other partners we have yet to meet from other planets. It is mere arrogance that allows human beings to define evolution by its supposed end point, namely ourselves. The spirit of creation, which has inspired evolution is not competition but communion. And we only know its life-giving energies when we see ourselves as part of a communion with all our fellow creatures, of all life, yes, even of the forms of life which are extinct: a partnership of all the living and all the dead.

This conviction requires more precise definition and more ample illustration which it will receive in subsequent blogs.