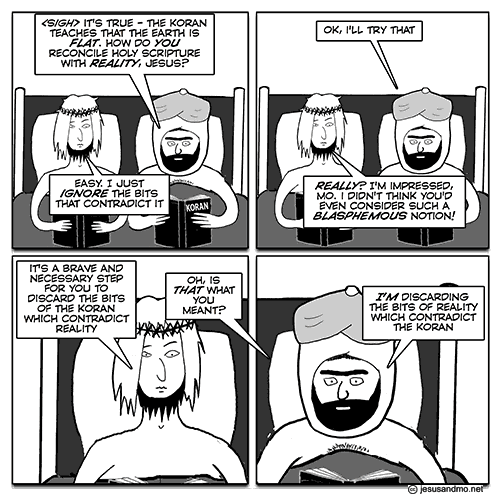 This cartoon is from a series called Jesus And Mo, which you can find under that title online. It’s a challenge to Christians as well as Moslems.

There is an archetypal Scots story about the visitor from England who meets an elderly female resident as he takes a walk on a beautiful summers evening by the banks of Loch Lomond.

(Many, including a famous Scots poet, have claimed this story as their own, but I found it in a Scots Magazine of 1856)

It’s a tale which highlights the national conviction that there’s no such thing as a free lunch, and that suffering is an inevitable part of life. This truth applies as much to Jesus as to the rest of us. I’ve emphasised his creativity in my last blog on this site, but in this blog I want to look at his suffering.

Of course we can immediately think of his arrest, trial and death, but it’s important also to see that suffering is inseparable from living in this world. We learn by doing things that are painful; we are subject to hunger, cold, heat, and illness; we suffer when we do not get what we desire; when our plans fail; when our friends let us down. We are always subject to the malice of others, and we may live under the sway of brutal imperial powers, as Jesus did.

Our capacity to accept suffering without losing creativity and courage is crucial to our humanity. If we accept it too readily, we become passive and fearful; if we refuse to accept it at all, we become ruthless in our determination to protect ourselves. Jesus  welcomed it as part of the human lot, as something shared with brothers and sisters, and also as a particular risk of all who challenged the ruling powers of their day, as he did. He called this, “taking up one’s cross,” in reference to the brutal execution process reserved by the Roman Empire for rebels, foreigners and slaves. Some scholars think that Jesus never mentioned the cross, and that after his death on a cross, his followers put this phrase on his lips. I think Jesus was perfectly able to see where his ministry might end and to shoulder his fate with a certain gaiety.

He did not glorify suffering as if it were a good thing, rather he saw it a) as solidarity with the sick, the poor, the disadvantaged and the disgraced, to whom he wanted to bring the goodness of God; and b) as an enemy to be battled and not avoided. Disciples were told to expect opposition from their nearest and dearest, lack of worldly goods and security, loss of reputation amongst fellow citizens, legal persecution, imprisonment and death.

Jesus saw a fundamental link between creativity and suffering. “The one who preserves his life will lose it; but the one who loses his life for my sake, will save it.” He also said, “A seed cannot bear fruit unless it falls into the ground and dies.” In solidarity with all who suffered Jesus accepted suffering; in solidarity with the God whose goodness he announced, he battled against it. That is why the Christian tradition has called him both lamb of God and lion of Judah.

It is this engagement with suffering which gives Jesus’ creative spirit its characteristic humour and sobriety. The man with the log in his eye, the disciple who needs to cut off his hand because it’s causing him to sin, the daft fellow who  builds a house with no foundations, the Jews who will neither play at weddings or funerals, (Luke 7:32), these are all depicted with the humorous sympathy of a man who understands human suffering. His sober estimation of the temptations of his revolutionary movement is also clear. He tells his eager disciples who have tunes of glory in their heads that a small child is greatest in God’s kingdom, and that his personal future is failure, trial and death.

With all that in view, I want to say that Jesus invents God as much by his suffering as by his creativity; and that, if we are true to Jesus, we must take seriously his image of God as suffering creator and creative sufferer, more seriously than most of Christian thinking has done. But when we accept this image and make it the basis of our faith, then Jesus will smile and tell us it’s a good image, but that God himself is “so much more.”