I want to preface this blog by dealing with a fundamental objection levelled by a number of readers at my first principle of theology, that all gods are invented by human beings.

The critics point out that from the perspective of the Judaeo- Christian tradition, I’ve simply got it all the wrong way round, as all human beings are invented by God, and all knowledge of God is revealed by God to human minds.

Yes, yes, I agree that’s the God and the humanity portrayed in the Bible; and that the faith that we are the creation of God from whom all life flows, is a true faith. But who made the Bible portrait of God and who created the concept of life as received from God’s hand?

People did, people like you and me, leaving the marks of their time, place, culture and above all of their human imaginations,  all over their image of the creator God. I am not suggesting that the creator god does not exist, or that he/she does not reveal his/her self to humanity, but I am pointing out that human knowledge of God comes from the exploratory fictions of human experience and imagination and is mediated by human worship, storytelling and writing, in the context of human community.

I don’t think this issue is merely an intellectual game. It is a matter of human survival in the face of religious fundamentalisms that pretend  believers have no choice but to obey their crazed deities who tell them to assault abortion doctors or to cut the heads off infidels. These are all people who have invented gods that suit their own bloodthirsty hatreds but are prevented by bad faith from admitting it. This bad faith however exists in all forms of religion that deny responsibility for their gods. The God who can be truly worshipped is one towards whom our inventions point, but who is always beyond all inventions. Worshipping this one, trusting this one, will from time to time lead to new inventions or modifications of what has been invented in the past. If religion is not to be the death of humanity we have to take full responsibility for what we believe and challenge adherents of other religions to do the same.

I can easily move from that argument to writing about Jesus, because of course, the thing about him that most horrified the religious leaders of his time, was that he went about re-inventing God. For them God had revealed himself in the Torah and the Writings and the Prophets, and the essence of true faith was to learn this revelation and to obey its prescriptions for holy living. All the true stories of God had been told; all the genuine commandments of God had been given; all the permitted means of worship had been prescribed. There was room for interpretation but not for invention because none of their tradition had been invented; it had been given, revealed, signed, sealed and delivered by God and therefore could be altered in any way; nothing could be taken away, nothing added.

You can almost sympathise with these leaders when they were confronted by a man who not only disobeyed the cherished commandments and rejected hallowed custom, but also was constantly telling new and blasphemous stories about God. Even worse he cheerfully accepted personal responsibility for his innovations, claiming that as God’s child he had authority to act on behalf of God. Where would this end, they must have asked, for if everyone began to take responsibility for their God, there wouldn’t be much point in religious leaders.

I am not exaggerating. Because of our own tradition of faith, which emphasises the authoritative revelation we have received, we fail to notice the revolutionary creativity of Jesus in his words and actions.

Take his impatience with the traditional concept of sin, which was fundamental to the power of the Temple and its priests. People would offend the holy God by their ritual impurities and moral failings, and would find forgiveness through the sacrificial rites of the Day of Atonement. Sin was serious business that required the skilled intervention of the priesthood. Jesus on the other hand saw sin and its attendant rituals as a prison in which people were locked or locked themselves, cutting them off from God and their neighbour. He used forgiveness as a key to this door, so that sinners could come out and get on with what God wanted them to do. The forgiveness is not an end in itself, but a means of getting people out of jail to start living. This involved inventing a God who was less concerned with transgression than with the welfare of his human children.

Or take his parables which constantly overturn the traditional pieties about God. I’ve have already written in this series of blogs about parable of the parable of the so-called prodigal son, which really ought to be called the parable of the foolish father or daft dad, in which God is offensively portrayed as fond, permissive and unable to control his own emotions for the sake of both of his sons. Then there’s the story of the great feast which features a rich man who plans a great banquet to which he invites all his rich friends,  and is so miffed when they find other things to do, that he  fills his house with the poor, the blind the crippled and the lame. How can this be the anything to do with God’s victory banquet to which the faithful expected to be invited? And how can this grumpy and impulsive host be a decent image of God? 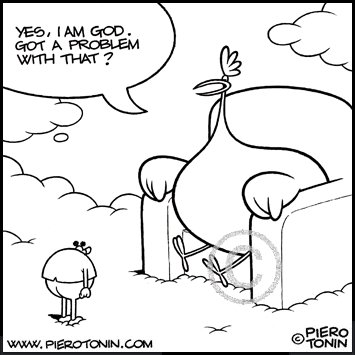 Jesus, and the faith – community that followed him, were continually inventing and re-inventing God in ways which did justice to their experience of the world and of the one who is beyond all worlds.

It was only when the Jesus communities became an established religion, that invention became suspect and indeed evil, because of course the power of a priesthood always rests on its possession of divine truth.  A tradition which has been received from God and is therefore unalterable, puts God in the pocket of its main keepers, who will use it to justify their cruelties.

A recovery of the Jesus who reconstructed God and God’s House, Jesus the Builder, you might say, would be a benefit to Christian believers, to believers of other faith traditions and to a world in which religious certainty has become lethal.