Yesterday my wife have me the gift of a book by my favourite poet, Don Paterson, “40 Sonnets” published by Faber and Faber. He is a marvellous writer, strangely described on the book’s blurb by fellow poet Paul Muldoon as the ” most interesting mid-career poet working in the UK.” Wow! If my pitch to be the next Pope  ever gets off the ground, I’ll probably not ask Mr Muldoon to be my publicity manager.

In fact, that little story chimes with my theme in this blog which is the importance of words. I recognise that with the world-wide use of social media, there must be a greater volume of public words than ever before. Sure, most of them are very ephemeral, which is just as well seeing how ill-considered many of them are. But that raises the question of the place of well- considered words in such a world. In the welter of communications daily flooding the media, is there any longer a place for poetry, or good prose, or significant speech? Judge for yourself from this sonnet by Don Paterson on the mercy – killing of his dog. 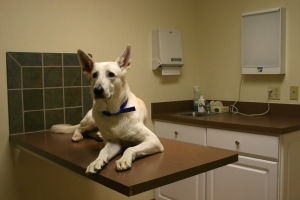 She might have had months left of  her dog – years

but to be who? She’d grown light as a nest

and spent the whole day under her long ears

listening to the bad radio in her breast.

On a steel bench, knowing what was taking shape

she tried and tried to stand, as if to sign

that she was still of use, and should escape

our selection. So I turned her face to mine,

and seeing only love there – which, for all

the wolf in her, she knew as well as we did –

she lay back down and let the needle enter.

And love was surely what her eyes conceded

as her stare grew hard, and one bright aerial

quit making its report back to the centre.

The words are simple and none is out of place, but the poem is not simple as anyone who has tried to speak of their feelings at such a death will know; in fact, all of us who have had this experience will feel on reading the poem, that somehow Don Paterson has managed to speak from our hearts as well as his own, not because of the authenticity of his emotion, although I do not doubt it, but because of his disciplined skill with words. Just look at that last phrase, the one bright aerial that “quit making its report to the centre” is of course the dog’s eye in death that ceases to communicate with the brain, but it’s also somehow the whole living creature ceasing to communicate with the centre of life. What centre of life? Do I know, my words are merely floundering but there is a power in Paterson’s words, that links the death with something even more fundamental, probably love.

Good words open up a community in which even those whose words are clumsy can share a truth, that is, an understanding that is adequate to their experience, and cherish it, knowing that it enriches their lives.

This is also true of the stories of Jesus. We often forget that the words of these stories come from a communal experience of Jesus, told and re- told until the words are pruned of everything unnecessary, and then written down by masters of narrative. Even meretricious modern translations cannot wholly spoil them, but reasonably literal translations are to be preferred. Here for example is one story in the translation by John Darby, from Luke chapter 7, vv 36ff:

39 And the Pharisee who had invited him, seeing it, spoke with himself saying, This person if he were a prophet would have known who and what the woman is who touches him, for she is a sinner.
40 And Jesus answering said to him, Simon, I have somewhat to say to you. And he says, Teacher, say.
41 There were two debtors of a certain creditor: one owed five hundred denarii and the other fifty;
42 but as they had nothing to pay, he forgave both of them their debt: say,which of them therefore will love him most?
43 And Simon answering said, I suppose he to whom he forgave the most. And he said to him, You have rightly judged.
44 And turning to the woman he said to Simon, Do you see this woman? I entered into your house; you gave me  me no water on my feet, but she has washed my feet with tears, and wiped them with her hair.
45 You gave me no kiss, but she from the time I came in has not ceased kissing my feet.
46 My head with oil you did not anoint, but she has anointed my feet with myrrh.
47 For which cause I say to you, Her many sins are forgiven; for she loved much; but he to whom little is forgiven loves little.
48 And he said to her, Your sins are forgiven.
49 And they that were with them at table began to say within themselves, Who is this who forgives also sins?
50 And he said to the woman, Your faith has saved you; go in peace.

If I were a Muslim or a Jew I would have been encouraged to memorise this story, so that it formed part of my store of wisdom. As it is, I have more or less done so after a lifetime of reading it. The words are precious, not just the incident they recount, for my retelling of the incident might be no more adequate than my retelling of Don Paterson’s poem.

The situation is briefly introduced, Jesus is eating with a Pharisee. Almost immediately the woman appears from nowhere and is described expressing her passionate thanks to Jesus. Here the details matter, she stands behind the reclining Jesus, she weeps, washes his feet with tears, dries them with her hair, kisses them and anoints them with myrrh. Even if we do not know Jewish table customs, we know all this is an embarrassing intrusion. The Pharisee thinks critically about Jesus and is caught doing so and made to answer a swift and brutal parable about debtors. Just how brutal is revealed when Jesus takes each courtesy lacking in the Pharisee’s welcome to dignify the loving courtesy of the woman he despises as sinful. The details of the Pharisee’s coldness have been held back from the reader until this moment so that we can experience the brutality of Jesus’ rebuke to the Pharisee and the delicacy of his honour to the woman, in a single moment of understanding. The woman is depicted as already trusting in Jesus’ forgiveness before he utters it, showing her gratitude in advance of his gift.

The story is a perfect representation of Jesus’ character: his brusque dismissal of religious status, self- righteous judgementalism and protocols, and his delight in those who have made their bare humanity into a gift. His counter- cultural conviction that men and women can inhabit a climate of generosity, shines from the narrative and makes a community of all who welcome its truth.

Did it happen exactly like this? We cannot know but we do know that small groups of Jewish and Gentile followers of Jesus, told it and re- told it, because it made a link between their mortal lives and something even more fundamental, probably love, which they could cherish and by which they were enriched.

Words can do this.