Here is another song by Sydney Carter, who also wrote Lord of the Dance. 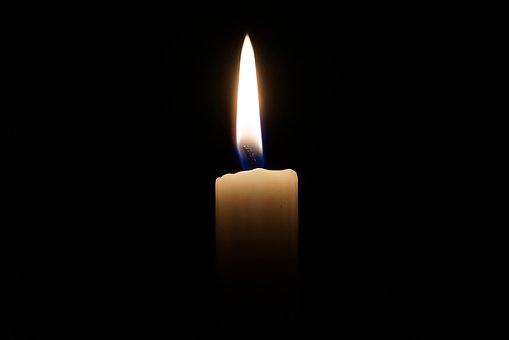 I am the candle light

I do not say there is a God

I only say hello.

Out of the nothingness

I have improbably come

and back again I go.

I am no messenger;

the thing I actually am

is all I ever show.

my fire is physical;

I have a body made of wax,

and soon it will be gone.

I am a miracle.

and then I travel on.

Carter believed that in everything that comes into existence, God says, “Let there be light”. For him creation was never in the past tense. Dogma does not help people to live but only attention to what is being created in them and around them.

This tiny song celebrates the light of existence as communicating no message, because any message would be inadequate to express the miracle of existence. Being light is more important than any theory of light, being alive than any theory about life.

All creation is de nihilo, from nothingness, and as such improbable. And impermanent. Existence requires matter which does not last forever in the same form.

Every existence is a miracle which stands out from the nothingness, and does not return to nothingness, but moves on.

This morning I presided at the funeral of a stillborn child. I did not read this poem, but it was in my mind as I spoke of the perfection, individuality and brevity of the child’s earthly life, and his travelling on to God, who recreates us beyond death. I urged his family to appreciate him as a miracle, and as a contradiction of the night that seemed to have enveloped him.

I also urged them to see themselves as brief miracles, however long they might live, and to be themselves with joy and courage.

Because it is the 14th of February, I had asked the family to bring Valentine Cards for the child, expressing their love for him. They did so, and I read them out. This did not deny the fragility of life, or the dignity of mourning, but simply affirmed that our brief existence is encompassed by love.