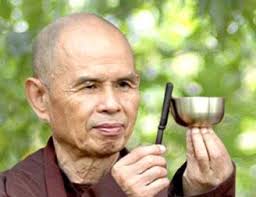 Do not say that I’ll depart tomorrow
because even today I still arrive.

Look deeply: I arrive in every second
to be a bud on a spring branch,
to be a tiny bird, with wings still fragile,
learning to sing in my new nest,
to be a caterpillar in the heart of a flower,
to be a jewel hiding itself in a stone.

I still arrive, in order to laugh and to cry,
in order to fear and to hope.;
The rhythm of my heart is the birth and
death of all that are alive.

I am the mayfly metamorphosing on the surface of the river,
and I am the bird which, when spring comes, arrives in time
to eat the mayfly.

I am the frog swimming happily in the clear pond,
and I am also the grass-snake who, approaching in silence,
feeds itself on the frog.

I am the child in Uganda, all skin and bones,
my legs as thin as bamboo sticks,
and I am the arms merchant, selling deadly weapons to Uganda.

I am the twelve-year-old girl, refugee on a small boat,
who throws herself into the ocean after being raped by a sea pirate,
and I am the pirate, my heart not yet capable of seeing and loving.

I am a member of the politburo, with plenty of power in my hands,
and I am the man who has to pay his “debt of blood” to, my people,
dying slowly in a forced labor camp.

My joy is like spring, so warm it makes flowers bloom in all walks of life.
My pain is like a river of tears, so full it fills the four oceans.

Please call me by my true names,
so I can hear all my cries and laughs at once,
so I can see that my joy and pain are one.

Please call me by my true names,
so I can wake up,
and so the door of my heart can be left open,
the door of compassion.

Thich Hat Hanh is the Teacher of the Plum Village Community in France, although I first heard of him when he came to the USA from his native Vietnam to speak against war. He is a man of profund courage and wisdom. In his poem above he wipes out the distinctions we so easily make between ourselves and others, insisting that true being is what he calls “interbeing” in which we recognise our unity with the universe: we are not all the same, as if our particular being did not matter, but in our innumerable differences we are one community. I would want to add that in my faith, this encompassing unity is God in whom, as St Paul said, we live and move and have our being. Whenever we realise our shared life, we realise God: in friendship, in partnership, in churches, in neighbourhood, in charity, in the fight for justice and peace in the world. When we do so we add to the names by which we call ourselves.

Of course we would all like to be called only by nice names: few of us want to be called Donald Trump, but when we remember our own denials of truth and our outbursts of rage, we may find it difficult to refuse that name. One of the categories of names I most want to refuse, are those of my fallen idols. Once I was delighted by the slightest connection with them, now, since they have displayed their feet of clay, I want nothing to do with them. This is especially true of Aung San Ssu Kyi, whom I revered in her long battle with the military junta of Myanmar for a measure of freedom and democracy. Her calm courage was an inspiring example. Now, however, she has chosen to ignore the evidence against her nation’s army, of a genocidal attack on Rohingya people, who live on Myanmar’s border with Bangladesh. She has refused to admit any wrongdoing and parroted  descredited myths about the Rohingyas being foreign settlers. I would be happy to identify with the Rohingyas but surely not now with Aung San Ssu Kyi?

Mind you, if I’m happy to be called Rohyngya, I’m even happier to be called Médicins Sans Frontieres/ Doctors Without Borders, who have been providing skilled medical attention for the Rohyngya refugess in Bangladesh. As always, many of their staff are locals whom they have trained and paid; as always they have remained impartial while bearing truthful witness to the facts of what they are dealing with. They refuse government and multinational company funding because they want to intervene as they see fit and not at the behest of others. They are efficient, modern, well- equipped, multi-national  and brave. If we need boots on the ground in areas of conflict, theirs are the most effective. Through them I can make my identity with Rohingya victims more than a prayer. Although they don’t know my name, they do know the reality of the care given in my name and the names of millions of others.

The Hebrew people saw the name of God as holy and therefore not to be spoken. Even today many of them refer to God simply as Hashem, the name. The ten commandments and numerous other passages warn people against dishonouring the name of God by word or action. If we want to honour the name of God whose shared life unites us all, we could do worse than follow the teaching of Thich Nhat Hanh by recognising with sorrow our identity with wrongdoers while activating our identity with those who do good.