Last blog began a series proposing a spiritual discipline based on the beatitudes or blessings of Jesus which can be found in my translation there. In this series I firstly investigate each blessing, after which I will suggest a way of using them all.

The second blessing is:

Happiness for those who grieve:

they will be comforted.

Jesus trusted in the Rule of God which would one day fully establish God’s will on earth, and he saw this rule arriving in his own ministry of teaching and healing. The happiness he promises does have a future dimension, but it begins in the present.

How can that be true for people who are grieving? This grief is not limited to personal bereavement, although it includes that, but covers also personal and communal grief at disasater, atrocity, oppression , poverty and injustice. How can there be any happiness for those mourning the death of a partner or a disaster which has affected a whole community? The Grenfell Tower disaster caused both personal and communal grief, so it provides a real test. Can there be any happiness for those survivors and relatives of victims?

The present public enquiry hints at an answer: although grief is not lessened by being shared, indeed it has in some instances been sharpened, the acts of speaking the grief and of listening to it confer a sense of privilege, of the preciousness of human sorrow, of the uniqueness as well as as the commonality of each particular sorrow, that constitutes a kind of happiness which those untouched by grief will never know. Is it mere rhetoric to call this happiness if it does not wipe the tears away? I don’t think so. Sure it does not lessen grief, but rather offers a profound experience of human solidarity to set against it, a happiness fragile but undeniable which does not deny the grief.

This precious solidarity is present wherever grief is shared, whether in a public investigation such as the Grenfell enquiry, or by two women in a maternity ward whose babies have been stillborn. The trust in which such grief can be shared is not a relationship only of the moment, but one which includes a future commitment to each other’s welfare and to a justice which tackles the causes of suffering. Anyone who is invited to share a sorrow, either as speaker or listener, is encouraged by Jesus’ blessing to trust this small good thing out of which the sorrow and its causes can be faced. 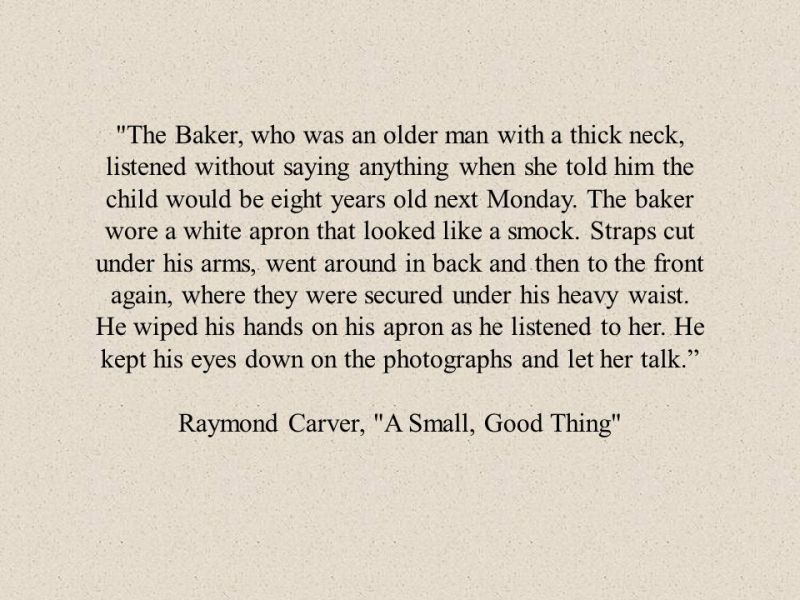 One of the very great pieces of writing I know is Raymond Carver’s short story, “A small good thing,” which recounts the tragedy of a young boy’s death, on his birthday, after a car accident. The terrible grief of his parents is accentuated by repeated phone messages from the baker whom the mother has engaged to make a birthday cake. He mistakes their lack of response as an attempt to ignore the deal they have made with him, and becomes slightly aggressive in his demand for payment. In the extremity of grief the mother decides to face up the baker, whether to shame him or destroy him is not clear. In the early hours of the morning the baker opens his bakery to them and is faced with the appalling fact of the child’s death and the inappropriateness of his messages. Instead of running away, or defending himself, the baker asks them to sit down, and serves them some of his new made bread, which creates a moment of peace in which they all recognise that the bread is a “small good thing” to set against the very large bad thing which has happened. Then the parents can talk and grieve with this stranger whom they know will understand. This summary in no way does justice to the beauty of the story – please read it for yourself- but it serves to model the happiness which arises from the shared truth of grief. Another American, e e cummings, wrote of this in a poem about his father:

His sorrow was as true as bread;

no liar looked him in the head.

The happiness of shared grief cannot be created by the lies of official regret, or the pious lies of conventional religion, or the intrusive lies of “sympathetic” media: it requires the recognition of fact: what happened and to whom it happened. This is nothing to do with the fashionble fatalism which says, “shit happens”: the fact is that tsunamis happen, but fires happen through negligence, chemical warfare is waged, terrorists kill people, children die of preventable disease, evil is done.

And when we open our hearts to share our own or another’s suffering, a fragile happiness is done.