This morning I came across the newly published New Testament, translated by David Bentley Hart, Yale University Press. It has some features which the author claims to be unique:

1. It has no theological bias

2. It translates the Greek as it is, bad Greek into bad English, good into good, without correction or improvement.

3.It therefore recognises the various styles of different books.

4. It tries to give its readers an impression of a Greek text of the 1st or 2nd century, rather than of a revered holy book. 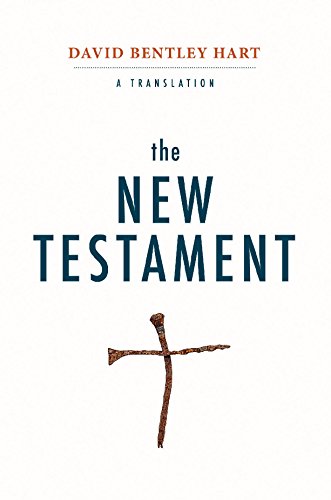 These are interesting features which the author faithfully provides, although I suspect that the first is a little less honest than the others, even if his bias is more interesting than that of some popular versions. I think he’s less alone in his method than he thinks. Certainly Nicholas King has attempted the same kind of thing in his vivid version of the New Testament, ( Mayhew) and Sarah Ruden has been posting on her blog fascinating glimpses of her work on the Gospels. Both of these are, I think, better equipped as translators than Hart, whose work is nevertheless revelatory and challenging. He shows for example that Paul says that God will judge us by our actions, and that he never says anything about predestination. He represents Paul’s maddening disregard of sentence structure and his occasional coarseness. By refusing to translate the Greek logos (word) in John chapter 1 he draws the readers’ attention to the fact that this is a concept which has no equivalent in English. He avoids translating the Greek Christos as Christ or Messiah and gives its literal sense as “anointed (one)”.

Readers who want something nearer the original than the versions used in church will learn a great deal from this new translation although they should look carefully at every sentence that describes God’s punishment of the wicked. Hart is convinced that none of these speak of ‘eternal” or “everlasting” punishment; I’m not so sure. Like Hart I want to reject the theology of eternal punishment, but I’ve always felt I was contradicting scripture. Perhaps in this instance his own theological bias is evident.

The main virtue of Hart’s translation is that it exposes the prevailing dishonesty of the most prestigious translations, which tidy up poor syntax, cover up gaps or confusions in the manuscripts, protect key church doctrines by their choice of words, and generally present the “Word of God” rather than a batch of early Christian writings, most of which are undated and anonymous, some of which are attributed to people who were not their authors, and many of which are written in barely literate Greek. The Greek New Testament is as the author suggests, a wild and offensive book.

It is also the book I love the best, because it provides early evidence of the historical impact of the life of Jesus of Nazareth on Jews and Gentiles. The theological bias of my church (Calvinist) led to biased translation (KJV) and a skewed interpretation which failed to do justice to the mystery and majesty of Jesus, as described in the original. No, we cannot be sure that every story about Jesus is historically accurate, or every description of him justified. But we can take the whole book as an accurate image of the memory of Jesus cherished in early church assemblies, and as a witness of his meaning for them. This does not justify my trust in Jesus as the definitive revelation of God, but it enables it, tests it and feeds it.

The assemblies of Jesus,amongst whom the writings were produced and circulated, were both extravagant and down to earth in their devotion to Jesus: extravagant in that they thought him the key to the meaning of the cosmos and were happy to risk their lives for his sake; down to earth in their readiness to make their wealth communal, so that the poor could enjoy the blessing promised by Jesus. Their pictures of him continue to be revelatory to me. How on earth did he manage to be ready for so many different people and their needs? His very occasional unreadiness, as in the story of the Canaanite woman he called a dog, shows how seldom he faltered, how frequently he met the need. And why can’t I be like that?

Any new translation of the New Testament is an addition to biblical scholarship, but it is also a stimulus to informed discipleship of Jesus. Blessings on David Bentley Hart!