The “house of God” stories told by Jesus tell us about fathers, male householders and even a strong man who needs to be beaten up, but women do not have a role. Classic Christian theology of God’s house continues this habit and refers to God as the father or the Lord. The classic narratives of Jesus and the twelve disciples limit his intimate followers to men, although they mentionnwomen who were followers. When we get to the letters of St Paul, we see that the young church communities had women in key roles, although the developing church failed to build on this practice and eventually excluded women from leadership. The church grew up in a patriarchal culture but the practice of Jesus and St Paul seems to have been more radical.

If the organisation of the church became patriarchal, its worship and theology followed suit. The Jewish tradition was of a male God, Yahweh, who was often depicted as a king with no consort. Only the book of Proverbs gives us a divine woman, the personification of Wisdom, who is described as God’s companion in creation. This is a fruitful image of God’s femininity, but it was not much used in subsequent Christian theology.

So, if I am engaged in constructing a theology of God’s House, I should be faced with the question in this blog’s title, “Where’s mama God?”

The Roman Catholic Church has an answer to this question. The Virgin Mother Mary, flesh of our flesh but removed into the life of God, is of course the Queen of Heaven, the mother who brings our prayers to her son, the new Eve who is the mother of the beloved disciple, meaning all disciples. Surely it would be good for a protestant like me to accept the wisdom of the Roman Church in its promotion of Mary, a woman, into the process, if not the object, of worship. Here is someone who redresses the balance of male/female in divinity, and allows a female access to God.

I don’t accept this answer, although I admire its power. For here is a woman deprived of her humanity, namely her sexuality as the wife of Joseph, and the mother of Jesus’ siblings. Perpetual virgin she was not, according to the scriptures, and to make her so was a denial of her womanhood, because female sexuality was a problem to the church, and had to be suppressed for the sake of holiness. Mary can become semi-divine because she is no longer really human. This is an image of womanhood which denies the powerful femininity ascribed to Mary in the Gospels and suggests that divinity is achieved by disabling humanity. The Virgin is part of the terrible story of Roman Catholic refusal of healthy sexuality to its laity while permitting an unhealthy sexuality in its celibate priesthood.

The other, perhaps more serious, defect of Marianism, is that it deflects the question about the gender of God. High-minded theology rejects this question out of hand: God is not a human being and cannot be subject to categories which are only suitable for human beings. Well, maybe, but why then call God father, king and lord? The answer to that may be that we cannot easily think of a genderless being, and do not want to in the cae of God, so “he”remains masculine. But if we take seriously Genesis 1: 27- “ God created humanity in his own image; in the image of God he created it; male and female he created them,” then we must believe that God is male and female rather than genderless. We do not need to invent a female partner for a male God, because God is both male and female, although this femaleness has been denied, suppressed and abominated by traditional theology, which reflects the smelly masculinity of its priesthood. 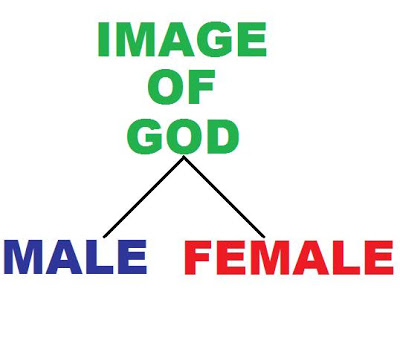 There is a wonderfully robust assertion of the motherhood of God in the “Showings” of Julian of Norwich, who sees that the God who gives birth to humanity and the Christ who gives rebirth in the power of fhe Spirit must be Mother as well as Father. Her subtle and suggestive theology is a model of how we can envisage a God who is more than gendered rather than less. There are also theologies based on Lady Wisdom, or Sophia in her Greek existence, which use the rich resources of the wisdom writings of the bible, Psalms, Proverbs, Song of Songs, Ecclesiastes, Job, Ruth and Jonah, along with Genesis and the Gospels, to set out the femaleness of God. We should note that this is a matter of ascribing femaleness to all members of the Trinity rather than for example, making only the Spirit female. But Jesus was male, somebody will object. True, he was, but what is he now?

The alert reader will have noticed that I incline to take male and female as more than socially constructed roles. Of course there are social constructions of male and female identity, but they are a response to a sexual dimorphism which is a fact of  most evolved life on earth. It is a beautifully imaginative nsight of the Genesis author that this dimorphism has its origin in the complex nature of its creator.