I share the sense of shock that Donald Trump won the election, but I do not share the common liberal opinion, that he is stupid. I thought all along that he was fighting the precisely right campaign to catch the votes of those who have decided that their relative disadvantages in life justify a general hatred towards those they see to be the cause of their discontents,  namely, foreigners, fags, uppity women and  those they call the elite. Trump spoke always with an eye on approving, encouraging and justifying that hatred. Even the accusations levellled at him of sexual abuse of women might well have been planted by himself or his close advisers, since I’m sure they helped win him votes.

The real cause of their many perceived disadvantages,  mamely the normal working of a capitalist economy, was pointed out clearly by only one politician, Bernie Sanders, the socialist defeated for nomination by Hillary Clinton. After his defeat, his analysis of what ails America was consigned to the waste bin by the main campaigns. It would have been interesting to say the least, to have seen some of the simmering anger direccted at the  bastions of the capitalist system, the banks, the multinational corporations, the stock exchanges, not to mention the vast army of accountants, lawyers, politicians, and media people, who in return for getting their snouts in the trough, serve Mammon. Unfortunately this has not happened. Even more unfortunately those who are most disadvantaged will find that if Trump wants to help them, he will be unable to do so, as he is allied to the interests that are screwing them and opposed to the kind of state interference that might assist them. He may, it is true, provide more employment opportunities by a programme of infrastructure renewal and controls on trade, but any benefits will be offset by the effects of his tax cuts for the wealthy and his support of the petrochemical giants. Unless of course, he is sincere in his desire to help and learns how to do it.

But he will also have to deal with the hatred he has encouraged and from which he has benefitted. It will not have been assuaged by dumping Hillary. The animal will demand food, again and again. Once Mexicans are repelled, what other foreigners will have to go? Once abortion has been made more difficult, will gays have to be cured by electro- convulsive therapy? Once Muslims have been baptised or banished, is it time to have a look at these pesky Jews? Once hatred has tasted blood, it’s hard to put it back on pet food.

In  Britain, as in Europe, right wing populism is on the march, most of it better informed than Trump’s supporters, and therefore potentially more dangerous. They too know the value of encouraging hatred.

If we are opposed to all this, what should we do?

I cannot speak for traditions of which I am ignorant, but only for my own, namely Christian Socialism, which adds to the imperatives of the Christian tradition, the analysis of social economy pioneered by Marx, as altered and developed in the tradition of democratic socialism throughout the world.

In obedience to Jesus, we must refuse all hatred, although we must become more expert in understanding it and its causes. We must be very aware of those groups calling themselves Christian who arouse hatred; we must call them out, and if they see nothing wrong in it, we must ask the support of the world church to declare them heretics. We must show ourselves  capable of building diverse and inclusive communities which refuse all hatred. This won’t be easy, because some of our congregations are not at all diverse. We must be prepared to change in order to become more than birds of a feather flocking together.

Intellectually we have to become much tougher. Good socialism doesn’t inculcate an ideology, it demands that people look at the facts which are concelaed or distorted by capitialist ideology. It wants people to see the world as it is, and their own true place in it. If we owe that place to exploitation, we must recognise this and take action. We must not be content with charitable responses to injustice and need, but cooperate with those who suffer from them in fighting them. We must appreciate the value of communal solutions and refuse those which meet our individual need only. Above all, we must recognise that “we are many, they are few” if we make common cause with brothers and sisters round the world, through churches, trade unions, NGO’s, professional associations and the like.

That’s a lot of work, but none of it is impossible and all of it is exciting. 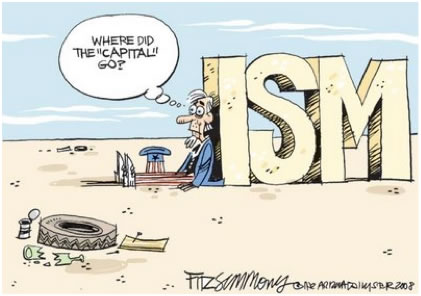 As I say, I can only make suggestions for my tradition. The food bank I support is run by Muslim people and distributes to non-muslims. It is called, “Taught by Muhammed.” I am sure that true Islam has much to contribute to opposing the forces of hatred. My local Sikh temple with its open kitchen and fellowship is already breaking down barriers. Green politics, of which I am an ignorant admirer, will surely develop its own relevant opposition to those who hate their own planet. And so on.

Maybe the value of Donald Trump’s win is to convince those who thought a liberal consensus was enough justice, to think again.