The Acts of the Apostles tells us that Paul decided to mix it with the intellectuals of Athens, by preaching to them on the Areopagus, basing his pitch on the fact that he had seen in the city an altar “to the Unknown God.” With some irony he commended them for their search for God and spoke of the God revealed in the gospel, who was not not in need of human help because He had created all things, and was not far away from anyone, for, as Paul had read in a Greek poem, ” in him we live and move and have our being.” The sermon, which led on to a mention of the risen Jesus, went down like a lead balloon, but I have always found Paul’s quotation very helpful, as a way of imagining God.

At first sight this may seem an attractive notion, with possible links to the doctrine of the Holy Spirit, but I have become wary of it, as it ultimately rests on a magical view of the world. For what is this presence of God in all things? My guess is that most people think of it a a kind of supernatural gloop circulating in all objects and creatures, or as a kind of aura shining out of them. Neither of these appeals to me, as there is no scientific evidence of them, and anyway I like the universe the way it is, cleared of gods and goddesses and all kinds of superstitious gobbledygook. So although the concept of panentheism may be convenient to theologians, I want them to discard it.

But how then can we imagine the companionable and energising presence of God within our ecosystem, our web of life? Or within ourselves?

This where I go back to St Paul’s quotation from an anonymous Greek poet:

“In him/ her we live and move and have our being.” 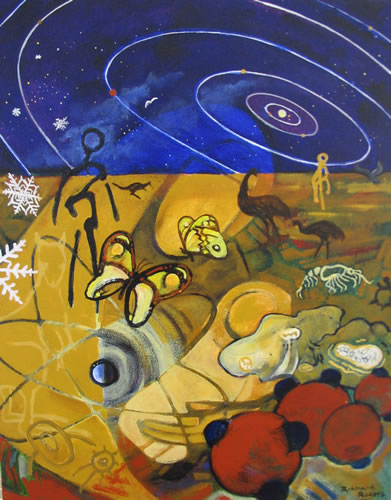 The first statement about God’s presence is not that God is in everything but that everything is “in God.”

Bible readers however will rightly say that this is not the picture given in the Bible, which shows God creating a universe separate from himself, into which he sometimes descends for a particular purpose, from his detached dwelling in “heaven.” Moreover the freedom of the universe and the free-will of human beings depends on some real separation from God.

The challenge to the notion of everything being “in God” from the biblical tradition is therefore twofold:

I suggest that the chaos envisaged in the bible creation story is within God rather than outside him. God makes space for his/her creation within herself. The repeated “let there be” represents God getting out of the road of what he is actively creating, which occupies a privileged position within God’s self, where every being is given the freedom to be its true self, which is also what God wants it to be. No wonder then, that all created things are described as “very good” for they are made in the goodness of God. 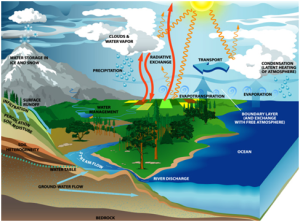 Of course as the Bible admits, this is not the universe we know, where so many things are not very good. But at what time does this perfect creation exist? The Bible seems to suggest before history, “in the beginning.” I suggest that the right answer is “before, during and after our history.” In other words the very good universe is what God is making rather than something completed. Until perfection comes, God is forever in the beginning.

But does image of the “universe in God” do justice to the freedom which physicists tell us exists right down to the the smallest particles of matter whose behaviour cannot be fully predicted? I think so, if we imagine God’s making space for the universe as including his/her refusal to intervene in it by force. The Bible notes in the story of Noah that God is tempted to do so, and sends the Great Flood, which however fails to do the trick as Noah turns out to be just as sinful as the humans that were wiped out. The upshot is that God decides to intervene only by persuasion, as in the story of Abraham and his descendants. The Bible tells us that God will maintain his distance, allowing the natural evolution of his creation to continue. But he/ she will not stop creating perfection-by persuasion. This guarantees the freedom of all ecosystems and the free will of human beings to be persuaded by God or not to be.

In my imagination I extend these concepts of freedom and persuasion to include the whole process of evolution from the Big Bang  onwards. The matter of the universe is free to develop according to its own internal logic but that logic itself is created by God and influenced by God’s persuasion.

Is there a vivid image which can help us explore the “being in God” of the universe? St Paul offered his Roman readers the image of the universe as the pregnant bride of God giving birth to his children. A bold image indeed. But I would adopt an even bolder image from the prophecy of Isaiah chapter 42, in which God says:

“For a long time I have held my peace,
I have been silent, restrained myself.
Now I will shriek like a woman in labor,
panting and gasping for air.” 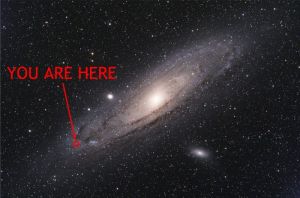 The picture is of God in labour with the future of her creation.

This encourages me to imagine the universe as the foetus in the womb of God. A pregnant woman does not interfere with the growth of her child in the womb; it is separate from her and yet within her, sharing her life and the “persuasion” to develop which her body provides. Even before its birth, it is surrounded by her love.

This is my image of the universe in God. It is not within God as a static thing, but as a developing life, moving towards the birth that God has planned. I will explore the implications of this concept in my next blog.