In my last blog I declared that the first principle of all theology must be:

ALL GODS ARE THE CREATION OF HUMAN BEINGS

But I went on to claim that true theologians trust that their inadequate creations capture enough of the truth to point towards one who is beyond all worlds, who can’t be grasped by human thought.

Let me expand a little on that argument. I grew up in a Christian household and church community, through which I was given access to a tradition that included ancient stories, moral prescriptions, prayers and evangelical discourses, including the stories of the life, death and resurrection of Jesus. These were transmitted to me by people who had adopted this tradition as their own and who tried to live according to its vision of life, through worship, prayer, bible study and practical goodness. Like all the generations of believers before them, they had adopted the creative imagination of the first believers, while adding their own creative interpretations of it, out of their own lived experience. They found it intellectually, aesthetically and morally satisfying to imagine God in this way, trusting that in ways beyond their understanding the goodness of the one beyond all worlds became a resource for their own living. They may or may not have believed in what are popularly called miracles, but this fundamental miracle, whereby the eternal goodness was transmitted through their human lives, without any supernatural magic, was central to their faith.

Keen eyed readers will have noticed that there is a lack of definition in my use of the word “goodness.” The Christian tradition defines goodness by identifying it with the character of God, which is revealed through a long process of development, culminating in one sentence in a letter of the first century CE, “God is love.” ( First Letter of John, chapter 4). Of course that ultimate simplicity contains many varied commands, illustrative stories and wise sayings, but all of these are to be interpreted in the light of the one simple truth of God’s love.

The fact that interpretation is required and that it involves the human experience of love, gives scope for the creative development of the tradition over time. My own conviction about the moral equality of heterosexual and homosexual relationships, which dates from long before this was the dominant view in society, was due to my own experience of love and my own understanding of homosexual love in people who were my friends. From that time I mentally excised from the tradition the ancient injunctions that told me otherwise.

But isn’t that a process of picking and choosing? Yes, it is. That’s what adults do. They don’t simply accept everything they are told, even by holy traditions they otherwise revere. But if the traditions need changing, why accept them in the first place? Because they are vast depositories of human wisdom, built up over time, that give access to a goodness which is beyond them. The very fact that they can and should be re-interpreted, as Christians say, ‘in the light of God’s spirit’ is evidence that they do give that access. 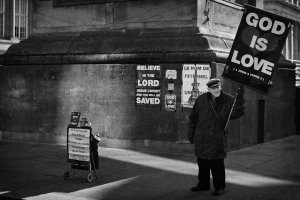 All of this means that as a believer  I am an active participant in the tradition to which I have chosen to belong. I must use all my intellect, imagination, and moral conscience in understanding, interpreting, criticising and altering this tradition. I cannot avoid my moral responsibility by saying, with Martin Luther, that my conscience is in chains to the word of God, for it is through my conscience that I first of all recognise any word as a word of God. If it is not a word of love it is not a word of my God. Can I justify that fundamental principle? No, I cannot. It grasps me by its majesty and rigor, and I wholeheartedly believe it to be true, but I know that it cannot be sustained by argument. It is the wisdom that I have chosen because somehow it first of all chose me and has been creating me.

There, I have used the word which represents my understanding of my own and other religious traditions: they are collections of human wisdom, which point beyond themselves. I can understand why sensible people might dismiss the claim that they point beyond themselves, or deny that there is anything to point to, but I cannot see why any agnosticism or atheism should mean that people neglect such vast stores of human imagination, moral perception and wisdom.

Does all this leave me, as fundamentalist believers might ask, unsure of my own salvation? Well, yes, in a sense it does. If there is no God or God is not love, I will not be saved. But if there is, perhaps I shall. Somehow, all my life I have found people who were sure of their own salvation, whether Jesus – lovers or Jihadis, profoundly unattractive.